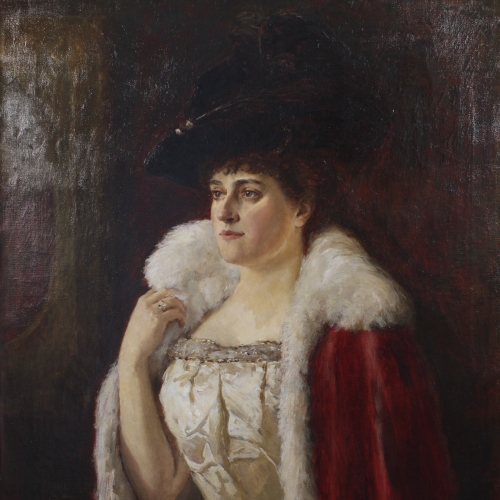 Description:
A Charming Portrait of Isabella, 3rd Marchioness of Ailsa wearing her ceremonial robe and stunning silk dress.
Isabella was the wife of Archibald Kennedy, 3rd Marquess of Ailsa (1st September 1847 to 9th April 1938) was a Scottish Peer, the eldest son of Archibald Kennedy, 2nd Marquess of Ailsa.
As a young man he served as an officer in the Coldstream Guards. He succeeded to the titles of 14th Earl of Cassilis, 16th Lord Kennedy, 3rd Marquess of Ailsa & 3rd Baron Ailsa on 20 March 1870. In 1885 he founded the Ailsa Shipbuilding Company. He held the office of Lord-Lieutenant of Ayrshire between 1919 and 1937.
Marriage and children

2nd Marriage, on 3 November 1891, Isabella MacMaster, and they had two children:


Henry Summers Kortright 1870-1942 was a prolific landscape and portrait painter who exhibited at major galleries. Born Southhampton he studied at Lamberth School of Art and Herkomers, Bushy, Hertfordshire.  He was married Primrose Margaret.